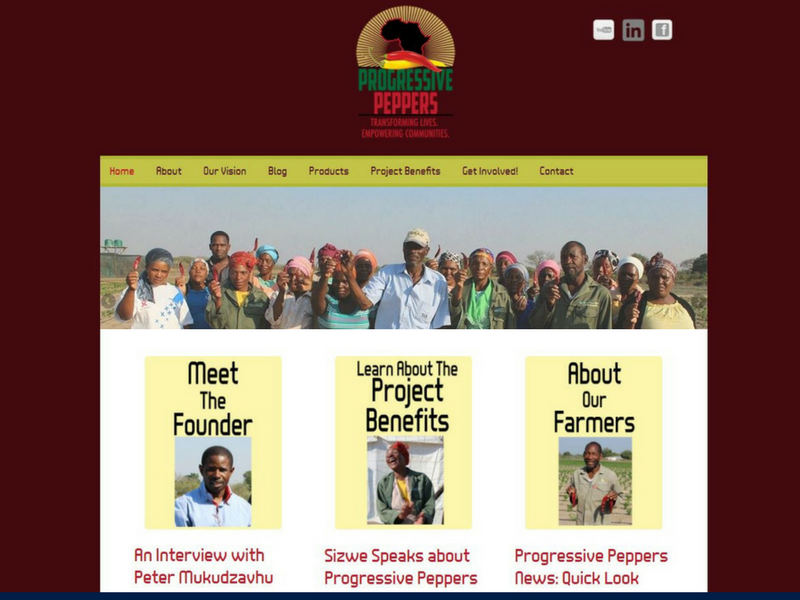 Peter Mukudzavhu is a Zimbabwe native, experienced agronomist and entrepreneur who is starting a business importing gourmet chili peppers from South Africa.  He required a website to enable him to share his vision as he networks and seeks support for his business.

Progressive Peppers was a delightful site to build. Not only were we fulfilling a business need, but we’ve been able to be a part of supporting an important philanthropic endeavor.  Not only is Peter starting a business, he’s doing so in a part of the world that offers few opportunities to rural farmers who are often far too dependent upon foreign aid that must be renewed each year.  Progressive Peppers will give them work, and the dignity of knowing they are taking care of themselves and their family. His agronomy techniques allow his farmers to grow a lucrative crop in almost fully sandy soil.  Wonderful!

Peter’s site had to be colorful, and convey his vision and the impact it will have.  We filled the site with pictures of the farmers from a trip Peter made to South Africa, and have continued to refine the messaging over time.  We’ve added videos as they became available – some we even edited for him.

Peter also needed a solid logo.  We worked with Kim Bain Advertising to create the powerful, distinctive logo that’s become the linchpin of his branding.  We used that logo to produce business cards for him, and Kim created rack cards that he can use as he speaks with those who are interested in the program.

Please click the image below to reach SiteGround. From there, you'll choose the appropriate package for your site.

Choose 'Get Plan' on the correct package for you.

Do You Have a Domain?

Have you already purchased your domain? Choose 'I already have a Domain', and enter your URL.

Need to register one at this time? Choose, 'Register a New Domain'. This will walk you through checking if the desired domain is available, or if you need to purchase a variant (because the one you'd like is taken). We can assist if needed!

From there, choose 'Proceed', and complete the sign-up process. We recommend signing up for 3 years at these prices!

VBW Clients - Send Us the Credentials

Send the new login to Liesl using this form - this saves to our database and doesn't email the info, for security.